Sometimes bad shows will throw up good lines. I was watching a new episode of LAS VEGAS on the Free-2-Air. Don’t know why. I have no excuses. Was it some fugitive Cheryl Ladd infatuation left over from my 70s boyhood? Nope. My favourite Charlie’s Angel was Tanya Roberts.

Did I think James Caan was going to rediscover his KILLER ELITE persona and whip out some pumping semi-automatic PECKINPAH-style firearm action and shoot everyone down? Nope. This blog doesn’t condone such shenanigans no-how.

I had no good reason apart from sheer potato-couchiness for not flipping the channel to discover a gem of broadcasting that would expand my mind as it cleaned my insides.

Thus I was stayed there slack-jawed with incipient moronic drool as the characters of Danny McCoy and Mike Cannon (love those names) decided who should enter the hotel suite of scary new casino boss Monica Mancuso. Danny is Mike’s superior and Mike kept coming up with pathetic reasons why Danny was the more appropriate choice to go through the door until Danny said, “Are you trying to pull lower rank on me?”

I think I might have attempted something similar in my working life before. Except not in a Vegas or casino-style environment. Although like Cannon and McCoy, I do have a cool name (ie Mr Trivia).

TO BE CONTINUED NEWS:

Everyone (that is to say no-one), has been asking about my band “To Be Continued”. After doing a little more research on Imelda Marcos, the First Lady of Phillipines’ former dictator the late Ferdinand Marcos, I was reminded of how crap they both were. So I’m scrapping all references to her and her shoe fetish (see earlier February Posts) and am searching for a new title for the album and a new cover image. 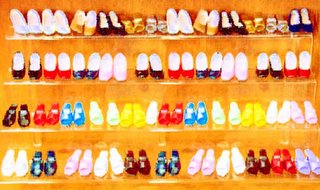 Meanwhile here are some lines I penned moments ago for a song from the new untitled album. I think I’ll call it SAD ABOUT SADNESS

Tears well in my eyes
They fill a well with water
I remember every flower
And icy Coke I bought her.

It’s a work in progress, friends. I’ll bring you more as I write. One shouldn’t rush these things, though.