Cast your mind back to the last time you read Quotations from Chairman Mao Tsetung (the so-called “Little Red Book”).

Mao wrote the following: “The socialist system will eventually replace the capitalist system; this is an objective law independent of man’s will. However much the reactionaries try to hold back the wheel of history, sooner or later revolution will take place and will inevitably triumph.”

And he probably couldn’t pick a Melbourne Cup winner either. The great thing about Gurus, Pundits or Rabble-Rousers is that they are so plausible. They know that if one says practically anything with enough authority, someone will believe, get on board, enlist in the cause.

Mao didn’t have a reputation as a sculptor either (although the late actor Anthony Quinn did). As awkward as this seems, I am about to segue.

When I need some down-time from my band, “To Be Continued” (see last post) I like to sculpt art. Sure, sometimes it’s only whittling a stick on my back porch, but near enough, I say.

I may soon have the readies together to order a half ton block of marble. I have two thoughts about what to sculpt. For quite a few years I dreamt of doing a 3D portrayal of the famous “poker playing dogs” of 20th Century folklore. Lately, I have dreamt that I might create a likeness of Sir Paul McCartney of Beatles fame.

Until then, please enjoy the photograph of this particularly boxy sculpture that has been exhibited outside of the Western Australian Art Gallery for the last twenty years or so.
Name and artist are unknown to me. 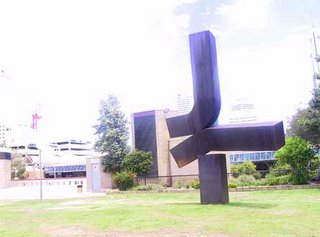