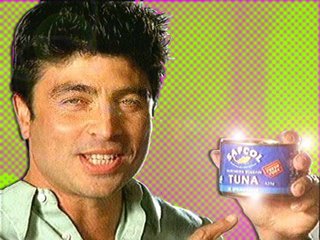 It has taken me some time to slip out of the “cranky pants” as one of my co-workers calls them. I wore them proudly after my last blog entry.

And the crankiness continued this evening. I don’t usually watch Better Freakin’ Homes and Gardens on the Seven Network, but if I do, it’s because Maeve O’Meara, the culinary goddess (and co-presenter of SBS’s The Food Lover’s Guide to Australia) is doing her thing.

However, in order to stave off my further decent into Grumpy Old Man status, I come not to bury Karen, but to praise TV Chef and Safcol pitch man, Geoff Jansz.

Geoff first burst upon our telly screens ten years ago as part of the bad craziness that was Burke’s Backyard. For those of you too disinterested to remember, Burke’s Backyard, was the premier lifestyle program on the Nine Network for many years. Then one day, eighteen months ago, the then boss of Nine, Kerry Packer, took Don Burke into the middle of a lake in a small rowboat… no, that was Michael Corleone and Fredo in Godfather 2. Sorry.

Geoff is currently one half of the team on Nine’s reasonably anonymous cooking show Fresh. It’s called Fresh because no one though of calling it Fly, Dope or Phat. Just my theory. The other half of the team is Australian Women’s Weekly Food Editor, Lyndey Milan.

Geoff keeps it real, people. Last week I saw an episode in which he crushed several cloves of garlic under his knife. He said, “Doing this will release the flavour as well as some tension.” Funny!

Geoff throws out these deadpan one-liners out all the time. Occasionally he gets a little too puckish and practically ‘winks ‘ at the camera to signal his gag, but mostly, he’s doing sterling work in the much-neglected area of cooking show humour.

I could have linked any number of the items above, but as that list takes in the two largest television networks and the largest magazine publishing company in Australia, I think I’ll let you Google whatever takes your fancy. Geoff’s own website is here.