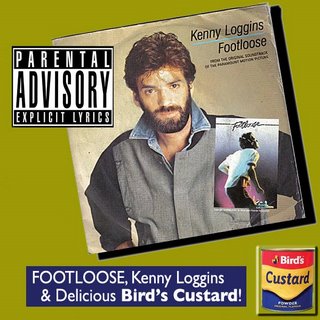 So Zeitgeisters,
FOOTLOOSE was on the old Free To Air. At first, I decided to ignore it. If you don’t remember FOOTLOOSE or never saw it, the film was made in 1984 and stars Kevin Bacon as teenager Ren McCormack who moves from Chicago to a small town called Bomont where Rock and Roll Music is against the law!

Why? I hear you ask. Because Rock is the Devil’s Music. And according to the screwy plot of FOOTLOOSE, five years before Ren’s arrival some kids from Bomont died in a drink-driving accident after they were out “enjoying” some of those devil rhythms. One of those kids was the son of Reverend Shaw Moore (John Lithgow) and the good Reverend dedicates himself to preaching against the deleterious effects of R-O-C-K.

And no Rock means no dancing and that means no Senior Prom.

It all sounds quite stupid. Which is why I almost didn’t watch the film again. However, some people did believe in bullshit like that back then, and continue to do so to this day. In fact, that banner year of 1984 was also when Tipper Gore, wife of former U.S. Vice President Al Gore, formed the infamous Parents Music Resource Centre (PMRC) to combat the language and ideas expressed in contemporary pop and rock.

It was the influence of busybody bodies like the PMRC that led to the U.S. record industry putting those annoying “Parental Advisory Explicit Lyrics” labels on certain compact discs and audio cassettes.

So what makes FOOTLOOSE the greatest film of the American Cinema? Well, nothing. But we 80s kids tend to remember it with great fondness. And why not? When Ren arrives at Bomont High on his first day, he drives up in a yellow Volkswagen Beetle with Quiet Riot’s “Metal Health” blaring on the stereo. He’s stickin’ it to the MAN!

Actually, he doesn’t know that Rock is banned at this point. When he discovers the Truth in the school cafeteria, he utters the deathless 80s phrase, “jump back!” to register his stunned amazement.

Later in the film, big city Ren, bursting with frustration, drives his Beetle to a secluded old building and let’s off steam with an acrobatic solo dance. This footage makes up much of the music-video that accompanied Kenny Loggin’s hit single theme song. At the time, there were a number of nitpickers who pointed out that most of this sequence was doubled by a much more experienced dancer.

Bacon disarmed this silly criticism by pointing out that when he read the script, the skill required for this scene wasn’t clear. It only said, “Ren gets out of his car and dances.”

There are many other reasons to enjoy this lightweight film. Despite the dumbness of the premise, the writing of the Reverend’s role and it’s performance by actor John Lithgow are not one-dimensional. In fact, most of the performances are well above par for a teen movie of that era. The film is Sarah Jessica Parker’s movie debut and it also features a likeable turn from the late Chris Penn as Willard.

If you’ve never seen FOOTLOOSE, don’t expect it to be anything more than it is – a well-crafted, 1980s teen film with engaging performances and catchy pop soundtrack.

But in this strife-torn era, on this ball of confusion, isn’t this what we need?

Anyhow, I’ll leave you with these thoughts while I enjoy a brisk walk in the park. For here in the southern hemisphere, we are experiencing chill winter. And when I return, I’ll prepare a warm, nutritious bowl of Bird’s Custard.

0 thoughts on “Ren Gets Out Of His Car And Dances”