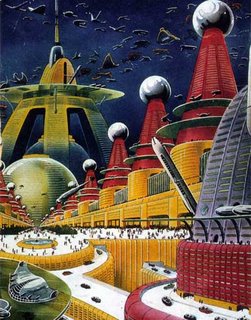 it’s 2006 already and still no sign of the rich bounty we were promised by the science fiction movies and television of yesteryear. These fanciful magic lantern shows were of course inspired by the Golden Age of written science fiction (approx.1938-1950).

Did we not envision this particular era we are suffering through now as an enlightened time of impossibly long travelators in clear plexiglass tubes? I was supposed to be able to step on a travelator here in Perth at 0855 and make my 0900 meeting in Beijing. Surely we all recall this?

Did we not imagine that items such as the following would be commonplace: floating cars with batwing doors, food replicators, recessed lighting, wall-sized telescreens, invisible helpmate computers and funky androids that served us martinis on the terrace in our geodesic dome home?

Did we not dream of a Utopian World Government that had ended famine, poverty and war, had our best interests at heart and was barely seen to govern at all; a benign Federation of Planets; a wise Jedi council?

Am I remembering this wrongly?