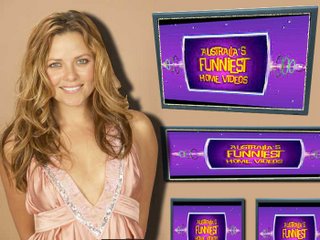 And Zeitgeisters, if you don’t know what AFHVS stands for, you’ll be stunned to discover it means Australia’s Funniest Home Video Show (Nine Network).

And yes. AFHVS is mediocre, mainstream, middle-of-the-road and vanilla. Or is it? (I learnt that little technique in high school debating.)

No, it’s actually bold, ground-breaking and revolutionary. “And why the hell is that. Mr Trivia?” I hear you ask.

Let us rewind to a recent Saturday. Witness the following: video-tape of a middle-aged couple sitting on a porch swing. Naturally, they swing back and forth. And like everyone else, I was thinking, yep, them chains is gonna bust and them two is gonna end up on th’floor! (Sorry , I’ve been watching the The Andy Griffith Show on Access 31). However, totally against all expectations, a dog leapt up and one of the couple fell out of the swing!

That chain was supposed to break! After fifteen years of AFHVS there was nothing else that the chain could do, but break. It was a certainty as solid as Gibraltar – but it didn’t happen. And with its non-happening, I caught a glimpse at a future, a revolution if you will, where other things might not happen.

Imagine a future where some dufus will not employ fishing line to make his pet appear to lip-synching a 1970s rock classic like Bohemian Rhapsody; a fat, drunken man at a wedding will not try to dip his dance partner too far and she won’t accidentally crash to the ground under his weight; a little kid will not swing for a t-ball, miss, and accidentally hit his father in the genitals.

But there’s a little more, Zeitgeisters, bear with me. Revolution is also a-brewing in the form of the current host of AFHVS, Toni Pearen. My partner, Miss Raspberry Beret, wrongly believes that I fancy Toni. This is because I have gushed, severally, about the job Toni is doing. Or the job she’s not doing (See what I did there?)

When Miss Pearen took over in 2003, I was simply glad that she wasn’t her squeaky-voiced predecessor, Kim Kilbey. But since then, Toni has carved a unique groove.

No matter how huge the prize, how lame the pun or how allegedly hilarious the upcoming video is, Toni never seems fully engaged in the task at hand. Toni P. reads that auto-cue, smiles, looks winsome and yet doesn’t appear particularly excited or even interested in the mirthful antics or the winning videos.

Who does that? Network 7 and 9 are chock-full of lifestyle shows with presenters who can feign enthusiasm and display pseudo-happiness at the drop of a pay cheque.