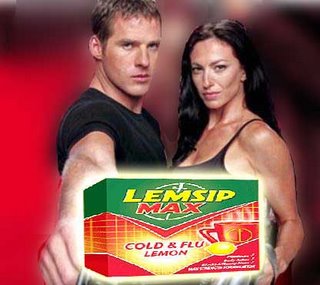 So now that you’re here, Zeitgesiters, why not suss out the other excellent blogs in the Mr Trivia family? I refer in particular to Ask Mr Trivia. It’s the blog where you can ask advice from a semi-fictional character with a pseudonym. Now there’s a basis for trust.

Here’s an example of the sterling work I do.

I am a 40 year old man working in the hospitality industry. Four weeks ago I broke up with my girlfriend of five years.I have spent the intervening time feeling angry, rejected, sad and stupid. The last straw came today.

I pulled a sickie and just lay on the couch knocking back scotch and watching daytime television. I saw this little robot Lemsip packet in the new Lemsip Max commercial and started crying. Then I saw a baby panda on an ABC promo and I cried even more.

Finally I saw an episode of Stargate – and Claudia Black from Farscape guest starred – and I found myself VERY attracted to her. Let me stress, that Farscape and Stargate are pieces of crap as far as I’m concerned, and although Miss Black is undoubtedly attractive, the crapness of these shows would, in normal circumstances, lead me to flip the channel.

What the heck is wrong with me?

Hi Nate,
I’m afraid this one is all too easy. You are clucky. And if I were to hazard a guess, I would say that Claudia Black reminds you in some way of your girlfriend. Try not to think too deeply about stuff, buddy. And maybe go do some paint-balling.