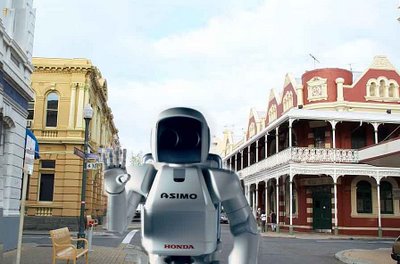 Pathetic and irrelevant attempt to photoshop Asimo, the cute Honda Robot, into an image of the historic city of Fremantle, W.Australia.

Zeitgeisters,
If you’ve ever watched the US television show Extreme Makeover, then you know the drill (and the bone-saw). The idea is that people ranging from the physically dowdy to the literally deformed are given major cosmetic surgery to their faces and bodies. Mostly the team of doctors and trainers are fixing the damage done by gravity, bad diets and ultra violet light. Occasionally the recipient does seem to need the procedure to change the quality of their life.

I am not attracted to the idea of a liposuction, a brow lift or Da Vinci Veneers. My interest would be in some form of cybernetic enhancement.

An eye that was also a laser that could cut through steel, concrete and glass for example. Or perhaps fingers that could morph into useful tools like Allen Keys and Phillips’ head screwdrivers before snapping back into original digital form.

The number one modification that would probably improve the quality of my life would be a back-up brain, where I could escape to and surf the web, while some state of the art Tivo recorded the boring conversation that I was missing. Like when I visit Howard, my accountant, I could “slip out the back” and look up “The Diet of Worms” in the Wikipedia, while he explains why my parking infringements in the Town of Vincent are not tax deductable.

Then in the evening, I could FFWD through the dull bits, note the salient points and get on with my life.

Although you know what? I probably wouldn’t bother to revise what my back-up brain had recorded. Recordings would be mislabelled. Or not labelled at all. Before long I would have a massive backlog of information that I couldn’t be stuffed checking up.

My life would end up as a series of unwatched home movies.

I just can’t trust myself to do my homework.