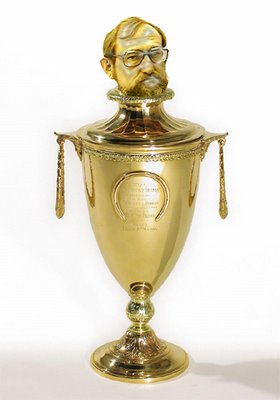 The world is full of superfluous awards and here is yet another. Earlier this month, Mr Trivia, who is now referring to himself in the third person, put out calls for nominations for the inaugural Curmudgeon Awards aka The ‘Muddies.

A “curmudgeon” is usually defined as an ill-tempered old man. And let’s face it,lately we have had a lot to be curmudgeonly about.

For those who regularly read this blog (hi, you two!) this process occurred in a parallel universe known as Mr Trivia’s email contact list. Sorry ‘bout that. We’ll do it differently next year. Mr Trivia and his crack team of Zeitgeist Consultants have compiled the results and responses.

Here now are the five nomination categories and the results. Judges decisions are final and any attempt to quibble will bring down upon the complainer the wrath of Woden, Thor or Mr Kelly from Hey Dad!

Most insultingly presented news event of the last 12 months.
The Tomkat story.

Most over-rated sporting personality of the last 12 months.
Shane Warne

Most over-rated gadget of the last 12 months.
Camera Phones.

Most insulting political decision of the last 12 months.
Ignoring the United Nations plea to overhaul the way in which we hold/treat/detain refugees.

There was a prize for those who suggested the nominees. The Curmudgeon Award Homeviewer Prize winner is Candice and she receives a bottle of St John’s Brook Shiraz Cabernet. Congratulations to you, Candice!

And thanks to all of you who entered.

Here, in detail, are some of the responses we received to the nomination categories.

Most insultingly presented news event of the last 12 months & why.

Hmmm, Brokeback Mountain uproar, Big Brother sex scandals, anything involving Shane Warne, but better than all of them… Channel 7 vs Channel 9 vs Eddie McGuire vs Jessica Rowe vs Channel 10 vs Bert Newton vs Kerry-Anne Kennerly

Has anyone seen Steve Liebman on the Channel 10 news? Only once, I would bet. I can’t pick an all-out favourtite event, but the man is a walking advertisement for not knowing when to call it a day. Probably not the tack that the question was intended to take, but for all out ‘insult the viewer’ value, Channel 10 wins hands down.

Labelling the Iraqi War part of the War On Terror

TomKat. I don’t know about you, but I can’t stand the sight of Tom Cruise. Every magazine I picked up before baby Suri (what kind of name is that…I could pull it off because I’m part Indian, but Suri is as Caucasian as they come) was born, had some sort of story about bloody Tom Cruise and his Scientology beliefs, his rant about Psychologists, and his deep and passionate love for Katie Holmes aka Joey Potter from Dawsons Creek. I’ll tell you what…I’d prefer the Lamb Roast over Tom Cruise any day…and I am Vegetarian.

Most irritating song of the last 12 months & why.

‘Beep’ by the Pussycat Dolls, so many reasons, It has Will I Am from the Black Eyed Peas in it and I’m sick of hearing and seeing him, for God’s sake now he’s teamed up with Sergio Mendez, it’s just an annoying song, and now matter how hard I try you can’t re-inset the beeped words.

James Blunt – Beautiful, Don’t you just wanna kick the bastard off the side of the cliff, Chuck Norris style?

That stupid Voodoo Child song by Rogue Traders. As if the chorus isn’t dumb enough, they repeat it twice every time, just to make sure you’re good and irritated! Not to mention that if there wasn’t a Neighbours bimbette in there, it probably would never have had any airplay anyway. And don’t even get me started on the video….

Delta Goodrums Olympic song for simply being over played.

NB: One further rant on this category has been placed at the end of this post for reasons of space. Yes, I mean you, Ben.

Most over-rated sporting personality of the last 12 months & why.

David Beckham – because he actually has no personality. BUT he does make Posh Spice look more intelligent.

Shane Warne – He just loves attention… so what if he gets shagged every week by three chicks… lucky him I say.!

Any one of the overpaid Neanderthals that featured in the World Cup (you know, the soccer one that they tried so hard to get us to call football?). If I had to pick one, it would be the French thug (Zidane) who not only got away with head-butting someone on the field, but also managed to make every one of the overpaid, over-rated officials with their snouts in the trough look like total gits.

Lucas Neill is classed as a World Cup hero…Lest we forget he was the reason why we lost the game! Why doesn’t he get shamed on?! The cup could have put Oz on the map for soccer but some Australian…I mean English…I mean Australian…no its English again…ruined it for us!! Damn you Lucas Neill, damn you and your fine self!!

Most over-rated gadget of the last 12 months & why.

The Playstation Portable – who wants to watch movies on the little screen? Haven’t they noticed HUGE plasma screens are the trend?

Motorola V3x, They’re shit phones but way too overmarketed and everyone has one

The V-Slicer. Okay, so maybe not the last 12 months, but I bought one, coz it looked so easy and I don’t cook. Largely because I am lazy. But it is not easy – it still takes forever to prepare everything ready for the almighty V-Slicer, because you still have to wash and peel and, well, remember to purchase, said veges etc. I might also add that fingernails are fair game for the V-Slicer, as are fingertips and anything else that gets caught in the rampage. Oh, and your fingers still smell of onion, unlike the silly man promises. When the V-Slicer can peel onions, give me a call.

MY i-Pod cos I accidentally put it through a super cycle in the washing machine, with fabric softener and everything and now it refuses to work and is a slightly crumpled car sh
ape. Darn!

The camera phone…the photos don’t turn out at all…and I upgraded to a phone with a flash, to one without one! No matter how close or how much I put up the quality of the photo, it never turns out, and it turns out to be a total waste of time. Now on top of that, Video recording on phones. You can record 1 minute of footage, with a camera that is worse than a SVHS handicam. What is the point when all audio is muffled and all vision is distorted? The people inventing bad portable mobile cameras should stop wasting their time on pointless technology and start working on our Jet Packs!! It’s the 21st Century people, I want my Jet Pack!!

Most insulting political decision of the last 12 months & why.

Australia’s new copyright laws are slightly ludicrous, so I can tape a show, but not watch it at a friend’s house.

Has a “decision” ever been made, as opposed to a complete over-reaction, a mad panic or a vengeful flipping of the bird to the Opposition?

Ignoring the United Nations plea to overhaul the way in which we hold/treat/detain refugees.

The Decision to show John Howard watching the Soccer in his damn green and gold tracksuit! How does that make him look anymore credible to the Australian public? He looks weird enough in his business attire, but to see ‘Casual Howard’ at home with his friends (who are all wearing suits) cheering at the soccer with is red rosy cheeks, and bushy eyebrows…just too much, just too much.

He’s seen you with your girlfriend on the tube. He thinks she’s an angel. He can see she’s taken. But he won’t lose no sleep on that’cause he’s got a plan. He’ll whine incessantly every half hour on every radio station, bleating: “You’re Beautiful”. James Blunt has managed to win the hearts of girls all over the world. Am I jealous of his success? Quite possibly. Am I jealous of James Blunt? Not freaking likely.

He probably sat down on his floor with his badly tuned acoustic,smoking his surname, wondering just how far he can go being the absolute ultimate moaning pansy on the planet. As he is probably aware, girls sometimes turn to liquid over emotionally damaged goods.He might be putting it on, or he might be a genuine cry-baby. I suppose that’s in now.

Sure, I haven’t met the guy, but I’d bet a tenner he’s one of the most self-important people working in popular music today. What do I have to base this on? Nothing. But this isn’t a referenced thesis, so wild,outlandish and undeniably true statements are well within protocol.

When I’m driving in my car and this guy comes on the radio my normal speed-limit abiding two car lengths behind demeanor goes out the window. How much road rage has been caused by this voice of pure unchecked evil? And you might say “Just change the station.” And if I’m alone that’s what I will do, in an instant. But one doesn’t always travel alone. There’s often a female hand reaching towards the radio,blocking attempts to switch it off, using netball skills or some shit because she’s really good at keeping his whine on. “I let you listen to the Top Gun soundtrack this morning.” I can’t see what that has to do with anything. James Blunt the… the little… tosser has got nothing on Miami Sound Machine, Kelly Loggins and Cheap Trick belting out rocking anthems dedicated to taking it to the limit, playing with the boys in your downtime, keeping your eyes on first place, and not Blunting girls on the tube.

Then last week I was dealt the ultimate blow: “You listen to Dido”. Is Blunt the male Dido? I’ve been heavily introspective ever since the possible connection was made.But the fact remains, I’d sooner coaster my Dido cds than allow my stereo to be a proxy for James Blunt’s bleeding heart. It’s gotta be bled dry by now, surely. Maybe if he keeps pining for angels long enough he’ll run out of blood. And because his blood is Oh So Rare and Special there won’t be any similar blood in the bank.

Can you hate a pop musician this much? I don’t know. Hate is such a strong word. Though I fear perhaps not quite strong enough.

Thanks for keeping it real and admitting your love for Dido’s music, Ben.