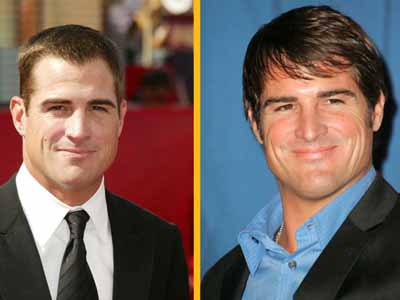 However, tonight, while watching the current series (in Australia) of CSI :Original Recipe, I was forced to witness the unpleasantness of George Eads’ new(ish) ‘do and I felt compelled to blog on’t.

George plays the part of Nick Stokes and has spent some 5 or 6 seasons with a haircut “you could set your watch to,” as Grandpa Simpson might say. It was always short; it always had that US Marine Corps vibe; it was always as dependable as the ebbing and flowing of the tides.

Now in something of an El Nino effect, I note that someone in Jerry Bruckheimer’s organization has decided to mess with the length of George’s crowning glory.

Although I chiefly watch CSI waiting for Grissom’s latest quip or piece of brilliance, and yes, for Marg Helgenberger, I admit it – the Eads’ crewcut was good because it never distracted from the series’ ludicrous lighting set-ups, stilted dialogue or frequent use of necroporn CGI.

Now, all of a sudden, the ‘do has jumped into the middle of the action with Shatner-sized ham and braggadocio. Eads’ new Anchorman-style quiff seems to be saying, “I will bomb you back into the stoneage.” Okay, maybe that’s a little too Nixon-era, but I think you dig my paradigmatic drift.

But its not all about me, people. Spare a thought for the anguish of true CSI slash Eads fans. They were most upset when this series aired at the beginning of 2006 in the US. This from arcsifan16 on TV.com is typical: “George Eads will always look good. But, I think that shorter hair fits him just a little bit better than long hair.” And that was one of the nicer comments.

Apparently, it all gets shorn off in the coming episodes. I hope so, because with the sideburns and flippy, fringey thing going on, it just feels a little too Manga crossed with 1970s Lee Majors for the whole enterprise to sit right with me.

But let us leave the final words to the Eadster himself. (courtesy of TV.com)

“ I caught a lot of flak about my appearance and I sure chuckle because it didn’t hurt our ratings at all. I want to send a message that it’s not about what you look like. It seems to be part of my introduction, this fascination with my own looks, so I try to move into waters a little bit deeper than that.”

Ever curious, that’s our George.