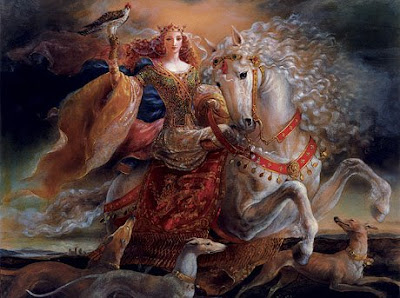 You woke up this morning asking the above question. Well, it turns out that she was somewhat of a rock-star back in the day. Anyone who read that last description and cringed, nay, reached for their mouse to click on ‘comments’ should probably not read any further. It may get a whole lot worse for you, history fans.

Yep, turns out she was like Elizabeth Taylor, Hillary Clinton, Jane Fonda and Angelina Jolie all rolled into one kick-ass Middle Ages super woman.

According to the Wikipedia:

Eleanor, Duchess of Aquitaine (1122 –1 April 1204) was one of the wealthiest and most powerful women in Europe during the High Middle Ages.

Eleanor succeeded her father as Duchess of Aquitaine and Countess of Poitiers at the age of fifteen, and thus became the most eligible bride in Europe. Three months after her accession she married Louis, son and junior co-ruler of her guardian, King Louis VI. As Queen of the Franks, she participated in the unsuccessful Second Crusade. Soon after the Crusade was over, Louis VII and Eleanor agreed to dissolve their marriage, because of Eleanor’s own desire for divorce and also because the only children they had were two daughters – Marie, and Alix. The royal marriage was annuled on 11 March, 1152, on the grounds of consanguinity within the fourth degree. Their daughters were declared legitimate and custody of them awarded to Louis, while Eleanor’s lands were restored to her.

As soon as she arrived in Poitiers, Eleanor proposed to the eleven years younger Henry, Duke of the Normans. On May 18, 1152, six weeks after the annulment of her first marriage, Eleanor married the Duke of the Normans. On 25 October, 1154 her husband ascended the throne of the Kingdom of England, making Eleanor Queen of the English. Over the next thirteen years, she bore Henry five sons, two of whom would become king, and three daughters. However, Henry and Eleanor eventually became estranged. She was imprisoned between 1173 and 1189 for supporting her son’s revolt against King Henry II.

Eleanor was widowed on 6 July 1189. Her husband was succeeded by their son, Richard the Lionheart, who soon released his mother. Now queen mother, Eleanor acted as a regent for her son while he went off on the Third Crusade. Eleanor survived her son Richard and lived well into the reign of her youngest son King John. By the time of her death she had outlived all of her children except for King John and Leonora, Queen of Castile.

Which is pretty amazing, I think we can all agree. Except those of you still furiously composing a reply. Philistine is spelt with a ‘f’ by the way. So where else would I have heard of Eleanor you’re asking. I’ll tell you. Popular culture. To return to the Wikipedia

Want to know more? Women in World History.com will see you right.

The illustrations accompanying this post are both the work of Kinuko Y. Craft. For more on her work, please click here. 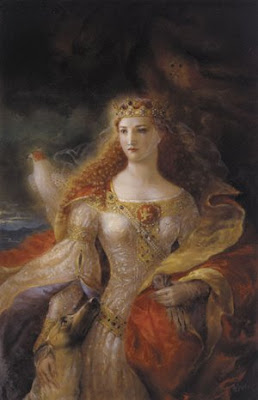