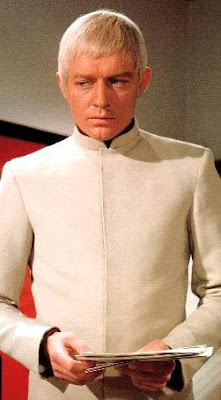 It’s hard to believe now, but when I was 17 years old, I was a bit of a geek. (Yeah, I know you believe it, just accept the rhetorical device, okay?) And one way this was evident, was my love for the Gerry Anderson television series UFO. Gerry Anderson, you’ll recall was the UK creator of the television series CAPTAIN SCARLET and THUNDERBIRDS, among others. Those were marionette based sci-fi series for kids (parodied by Parker and Stone’s TEAM AMERICA film).

Along with SPACE 1999, the series UFO was one of Anderson’s adult-oriented, live action series. The premise was that the earth was under constant attack from alien ships. And our only line of defence was a group called SHADO – Supreme Headquarters Alien Defence Organisation. This was all very hush-hush. So much so that SHADO was hidden underneath a Pinewood-like movie studio in England. Naturally.

The series was made in 1971. I recently bought the DVD boxed set and discovered that the things I used to like about it – cool cars with batwing doors, the funky Moonbase chicks with their purple hair and the weird ‘Martian’ attack ships were all still very funky. However the stories are convoluted and the performances are rather stilted and well – marionette-like.

The head of SHADO was an American fellow with bleached blonde hair. He was called Ed Straker and he was played by Amercan actor the late Ed Bishop. Bishop gave some real flair to the role of the hard-drinking, chain-smoking Alien Defence head honcho.

Here’s where the story gets even daggier and geekier. Wind back to my being 17. There was a kid at my high school who looked quite a bit like Straker, in my opinion.He was about 15 or so. I encouraged my group of geek mates to call out “Straker!” whenever we saw this guy walking over the oval, towards the canteen, whatever. It should be said that UFO was an ageing series even at this point and I had to explain to some of my fellow geeks about the show and who Straker was.

Anyway, we did it. For about three months whenever this kid walked within our sight we shouted “STRAKER!” at the top of our lungs. (Obnoxious and odd, yes.) This kid never acknowledged we were doing this. We assumed he was a bit dim and probably not a geek. Our aim was not to insult him. “Hey kid, you look like a guy from an obscure science fiction series that you’ve probably never heard of!” We just thought his resemblance and our name-checking it, was funny.

Then one day, somehow, we didn’t see this guy walking by. In fact, he walked right up to our group and said, “Why didn’t you guys shout Straker! just now?” We didn’t have an answer. In fact, his asking the question made our fine enterprise seem, well, dumb and a bit childish.

So we stopped doing it.

p.s. Check out opening sequence at me other blog.