I have a friend who loves those annual verge-side garbage collections run by local municipalities. She and her boyfriend keep an eye out for furniture whenever their suburb, one of Perth’s ritzy, western ones, has its call for “hard rubbish.”

I find the act of ditching my stuff produces an emotional response in me. I have no problem throwing things away, I just don’t like seeing my scaly neighbours and random strangers pawing through my possessions on the front lawn. Imagine your despised next-door-but-one, touching your worn-out Tamagotchi or perhaps fondling your collection of used ointment applicators. Noooo!

As I was taking a walk on the weekend, I went around a nearby corner and gave a quick nod to a woman and her son who were carrying an old sideboard out to the kerb. She ignored me, possibly because I was walking on ‘her’ verge and also because she was spending a lot of energy getting worked up over the fact that her neighbours had put a couple of old lounge chairs out on ‘her’ verge. Her teenage son just grunted to indicate “I hear you, but I don’t give a crap – this is keeping me away from Guitar Hero: Metallica.” 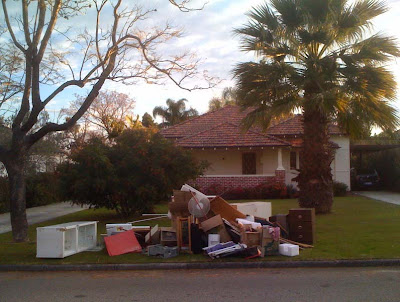 ABOVE: A treasure trove for the discerning collector.

So in a quick philosophical left turn that I need to wrap up this blog post, I conclude that recycling is good. Learn to invest less emotion in objects and see it as stuff that other people can find a home for. Either that or be the sort of person who bitches about the neighbours in front of other neighbours and your kids – or worse still, blogs about it.