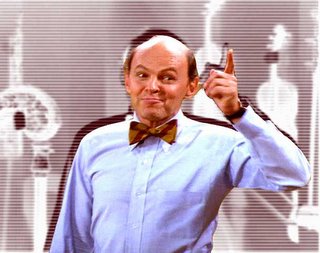 Conrad Janis is best known the world over for the role of bald, bow-tie wearing, Fred McConnell (Mindy’s father) in the worldwide hit sitcom MORK AND MINDY (1978-82). He has appeared in numerous other television series over the years such as DIAGNOSIS MURDER and FRASIER and is also a well-regarded jazz trombonist (Why not search for his music on the ‘net? Buy it, if you’re into jazz or tromboning.)

Conrad’s Fred McConnell was given very few truly comic lines and in episode after episode was encouraged to blast through these with the sarcasm dialled up high (think Darren 2 from BEWITCHED). But despite all this he made an important contribution to the show. This became evident after Fred was removed from the series for all of season 2. He was returned from season 3.

Conrad Janis celebrated his 78th birthday a week ago (11th February) so let us celebrate his Fredness and his jazz stylings.