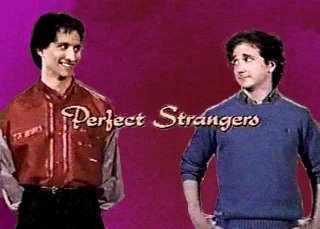 From 1986 to 1993 the whole planet rocked with laughter as it enjoyed the mirth-filled antics of Balki Bartokomous (Bronson Pinchot) and Cozzin (Cousin) Larry in 150 derivative, yet formulaic episodes of the sitcom Perfect Strangers.

Balki, a “sheepherder” travels all the way from the Mediterranean island of Mipos, in order to live with his Cousin Larry, a would-be writer in Chicago. It soon transpires that Balki is a screw-up in his native Mipos and basically has no where else to go!

Series creator Dale McRaven was actually one of the creators of Mork and Mindy and had writing credits on television’s The Odd Couple, so clearly it wasn’t a stretch to bring together these elements and twist them slightly in order to make Perfect Strangers.

Its the predictability of the plots that make this sitcom less than classic. However, the lead performances are quite excellent. Linn-Baker and Pinchot had real chemistry and energy that meant that even the worst episodes of this show had their snap and sparkle to carry it through.

For those who wish to see either actor in a non-Perfect Strangers capacity; Pinchot was memorable as Serge in the first Beverly Hills Cop (1984) but also good in the so-so Vibes (1989). Mark Linn-Baker is probably best seen in the 1982 movie My Favourite Year (directed by Richard Benjamin).

So why do we celebrate this series? Because for one short period, it was a thread in the complex tapestry of our lives. Unless you have cable, in which case you probably saw it this morning.

Jo-Marie Payton Noble, who played the elevator operator Hariette Winslow was later spun-off into the television series Family Matters (yes, the one with Urkel in it).