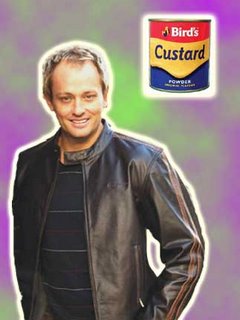 I am about to speak to youse about “Big Brother 2006”. Otherwise referred to as BB06. And yes, I refer to the Channel 10 reality show. If you are one of those who reacts reflexively and negatively to the mere mention of this program, then turn away NOW!

As a Night Owl (read ‘insomniac’) I appreciate “Big Brother Up-Late” more than I’m willing to admit (until now).

The Up-Late Show is two hours of live-streaming video of whatever the housemates are up to between 11:00 pm and 1:00 am Eastern Standard Time. Obviously, there’s some intervention from the BB Control Room – certain topics are cut away from quickly – particularly anything that might slander someone from outside the House.

As a writer-type-guy I am fascinated by the sorts of things an ever-diminishing group of twenty-somethings might say to each other around the witching hour. And believe me, it’s mostly chat.

There are often quite good juxtapositions when the Control Room switches from one part of the House to another. Say, from the egghead group discussing Noam Chomsky in the bedroom to the boys in the spa having a belching competition.

Sometimes the talk is so weird and uninformed that it leaves you gob-smacked. I’ve just witnessed a conversation about purchasing groceries for the coming week in the House. The participants were John (surf-wax hair), Dino (minus the mattress) and Gaelan. They got in that “agreeing” space that you can find yourself in when you’re bonding.

The trio were agreeing that they needed to purchase carbs, especially rice and pasta. And that potatoes are really good because you can serve them any way. Gaelan said cooked or raw. John agreed you can have them raw. No-one else disagreed. Consensus was achieved.

I’m sure someone somewhere is eating raw potatoes. Some hardcore freakin’ vegan who secretly hates food, perhaps. But it seemed unusual.

So, why is Big Brother voice-man and “Up-Late” host Mike Goldman getting props from this blog? Because the “Up-Late Game Show” which ran from the end of BB05 until last week; the one hosted by former BB Housemate Simon “Hotdogs” Deering, was dire. He was okay, but it all felt a bit laboured and unnatural.

With all due respect to Hotdogs, Mike Goldman can juggle the callers and the games in his sleep. Often this seems to be what he’s doing. As the months wear on, he appears to sink deeper and deeper into sleep debt. He’s a naturally funny fella and it’s entertaining seeing him navigate his way through the wee small hours without snapping or saying something quite pointed.

Goldman has the mojo and we salute him.