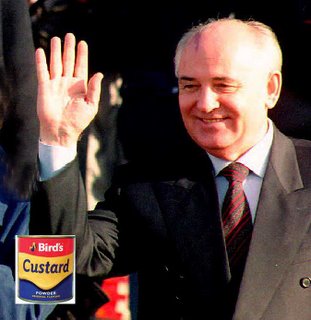 Years ago, I watched a documentary on the band REM. Their method for coming up with album names involved pinning up a list in the studio while they worked on that album and band members would add names to the list as the mood took them. If memory serves, Michael Stipe said two titles came up album after album and were never used. One was “Love and Squalor” which is taken from a JD Salinger story, and the other was “Cat Butt”.

For the last few months, my band has been toying with changing its name from “To Be Continued” to something with a little more zing and pizzazz. A fortnight ago we became“Dancing with Gorbachev”.

Unfortunately, It turns out that many people don’t know who Mikhail Gorbachev is or was. Time to rectify this situation. The campaign to inform the populace about this man, begins here.

In 1985 Mikhail Sergeyevich Gorbachev was elected the General Secretary of the Communist Party of the Soviet Union. He was instrumental in the creation of policies and doctrines that lead to the end of 45 years of Cold War, the democratisation of Eastern Europe and the near collapse of the Russian economy. You remember… Perestroika… Glasnost…. Gorby. Anyhow, go to Wikipedia, the font of all knowledge and have a read.

You might also like to travel to Gorbachev’s own site, mikhailgorbachev.org. His 70th birthday was on March 2, 2001, and a stunning lineup of 1980s politicos sent in written tributes. Read the words of former President of the USA, George Bush Senior who found it necessary to include the term “market economy” in his celebration of Gorby.

Even better is former president of Germany, Richard von Weizsäcker, who writes a long rambling screed in which he mentions, among other things, the excellence of his own wife as a hostess, and also this:

“Now under Gorbachev each socialist state had to decide its future development independently. The Press Secretary of the Russian Ministry of Foreign Affairs, Gennady Gerasimov dubbed this the ‘Sumatra’s Doctrine’ based on Frank Sumatra’s song called ‘My Way’.”

As Mike Moore used to say on “Frontline”: “Hmmmm”.

Firstly, on behalf of “Dancing with Gorbachev” I urge you, if you are a young person, to do some reading about Gorby. Discuss him with your parents, etc. If you are an older person, spend just a few minutes today talking to a young person about who Gorbachev was and what he meant in 1989. Do it for my band.