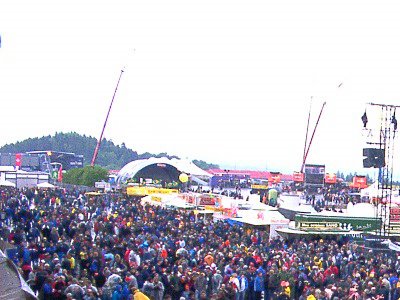 Gorby’s back in the day, rockin’ hard at the 2006 Million Paws March, St James Mitchell Park, South Perth. Or maybe not.

I’m afraid the rumours are true. My band, Dancing With Gorbachev (DWG) have split, owing to irreconcilable indifference on the part of Society.

Was our rock too confronting?
Was our truth too hard to bear?
Were our harmonies just too sweet?

The best review we ever got was this: “Youse guys are 100% uncompromising, four on the floor, straight down the line, meat and potatoes, balls to the wall, pedal to the metal, rock and f**king roll.” That was our drummer Vik Suprotik’s gran.
Thanks for that!

Let me leave you with the lyrics to a song that Pedrag, Zlatko and I wrote. It’s in the style of Cheap Trick’s “Dream Police”. It’s called “Depthy”.

Thanks to you all.

p.s. If you missed the story of my band(s), then you can re-live the highs and lows; the whole poignant saga in the following blog entries: