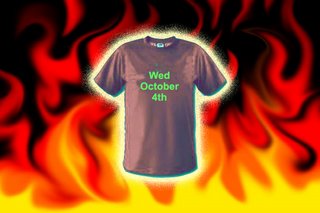 Many of you know where I work. For those who don’t, it may or may not be CLONE PRINTS a 60 minute photocopying house in the Perth suburb of Nedlands. Or perhaps it’s THE CLASS MENAGERIE an up-scale pet shop in Leeming. The hypotheticals are endless, so let’s move on.

For the last two years, at my work place, we have resurrected the term Rocktober to describe the tenth month.

Why? Because Rocktober was the name radio DJs used – without irony – in the 1970s. Because October is just a little too far away from Christmas and New Year to be of any use. (Halloween? – Whateverrr…)

So if a month has to ROCK it should be Rocktober.

The name of the game is simple. For the entire month of Rocktober, find ways to use the following terms in conversation:

Rockin’
That Rocks (You Rock etc.)
Rocked up to
Rock out
Rock my World
Rock on

You get the picture. The other important feature of Rocktober is the Wearing of the Shirt.

The Rock t-shirt was a popular item of clothing in the 1970s and 1980s. Its popularity declined somewhat during the 1990s. We believe the time is very right for the Rock T-Shirt’s triumphant resurgence.

So on Wednesday the 4th of October, wear a Rock t-shirt.

Wear it at home or out. Wear it to work if they Rock. Wear it loudly and proudly.

Stick on a muso t-shirt. Anyone from Van Halen to Robbie Williams from the Artic Monkeys through to Air. Avoid any debate on this subject. If you think that the muso or band on your t-shirt Rocks, then they do. That’s the point.

Then take a photo and send it through to us at an email address to be announced and we will get it up online in the following fortnight.

Mr Trivia warns that the full term Rock n ’Roll, used in isolation, should probably be avoided by newbies. The temptation to utter it as a signal of something huge and exciting (a night out, a visit to your Gran’s etc.) doesn’t usually pay off. There are no high-fives all around. Your friends don’t take up the call. Embarrassment is the result.