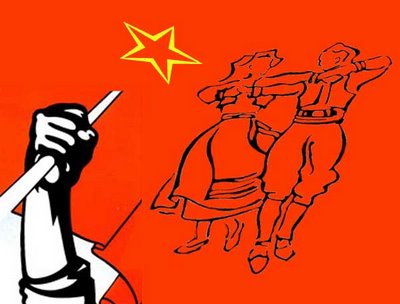 Hey Kids! (Of All Ages!)
Run out of fun stuff to do on the Internet this weekend?
Why not check out these boffo sites?

www.communism.com – has extensive stuff on communism for all those who wanted to know about the subject but were too bourgeois to ask. It gives a scientific definition of communism and contrasts it with what the site calls a “bullshit definition” i.e.:

“Rule of society by a single party which maintains a monopoly of political power and suppresses all opposition. Control of the economy via centralized bureaucratic planning.”

There’s plenty that will annoy and stimulate you in this text-y yet colourful site. There’s an FAQ and a poll, which asks among other questions:

“Is communism a monstrous system of slavery or the
inevitable peaceful and abundant future of humankind?”

For all those missing the feel of a poli-sci debate at an undergraduate level.

www.folkdancing .com – from its plain black text on white background, through to its descriptions of folk dancing, this is the site for those of you craving an American take on traditional European (and especially Scandinavian) folkdance.

When you discover this term, “Norway Parisarpolka classical hardingfele couple” you might be forgiven for thinking – “ah ha, if that’s folk dancing, it’s definitely the horizontal kind”. But no. As it says on the site:

“ This figure dance for couples, with the typical forward and back pattern common to so many Norwegian folk dances (reinlendar and feiar, for example) is the likely ancestor of the “Scandinavian Polka” (or “Seattle Polka,” as it is called in the Pacific Northwest) widely danced in many parts of the United States.”

Forget ballroom and line dancing. Folk dancing was where it was and now its where it’s at. Again. For real.

0 thoughts on “The Internet is Heaps Fun”