Our friend, Kenji Phlange used to write about politics for the now-defunct Monopoly Men site. We have invited him here to spiel on anything with a vaguely political bent that grabs his interest during the week. And with out customary inventiveness we are naming this section as above. Pretty good, huh?

This entry can also be found at mrtrivia.net. 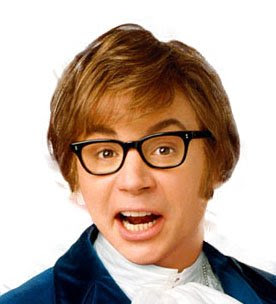 “Who Throws A Shoe? Honestly.” Austin Powers, International Man of Mystery asked this in his 1997 film. We now know the answer is Muntazer al-Zaidi, a television journalist who lobbed his size 10 loafers at President George W. Bush during a Baghdad press conference, a week ago, when the ‘leader of the free world’ was visiting Iraq.

President Bush’s idea was to spin the unpopular Iraq War. Something along the lines of “Hey you guys, The Surge is working real well, even though you all said it wouldn’t. Who looks stupid now?” It’s all part of his all singin’, all-dancin’ GEORGE W. BUSH THE LEGACY SHOW, touring now in the last days of his presidency.

Mr al-Zaidi ruined ‘The Surge is Good’ story for President Bush. The hurled footwear became the story and anything else Bush wanted to say about the amazing job he thinks the US has done in Iraq, was obliterated by the pictures of the President niftily ducking Mr al-Zaidi’s TWO attempts at braining him. (President-elect Obama is doutless thinking of a major security overhaul right now.)

Mr al-Zaidi shouted that his act was a ‘farewell kiss’ to Bush and it was for the Iraqi widows and orphans that the war had produced. He is currently in prison for this incident, although many view him as a hero. According to the The Times, Mr al-Zaidi has had a unting effect on his countrymen, ” Thousands gathered in cities across the country, Sunni and Shia, to show solidarity with the Shoe Man,” The Times said.

See, George W, Bush has brought the Iraqi peoples together.

The sideshow story of the week is the tale of the Pennsylvania supermarket that refused to write the name Aldolf Hitler onto a child’s birthday cake. The child, three-year old Adolf Hiltler Campbell, made the news when his parents thought it would be a good idea to get their fifteen minutes of fame by complaining to the media about treatment they received from the Shoprite Supermarket. Luckily, a Wal-Mart store, thankfully free of the ideology and ethical burdens of the Shoprite people, eventually agreed to make a cake with the offending name rendered in yummy icing.

Although the parents, Heath and Deborah Campbell have two other children with neo-Nazi themed moncikers (e.g. JoyceLynn Aryan Nation Campbell) they don’t see what all the fuss is about. Mr Campbell apparently believes that people, “need to take their heads out of the cloud they’ve been in and start focusing on the future and not on the past.” Perhaps he should have named his kid after someone other than the most feared and reviled dictator of the 20th century. That one thing right there, might be seen as irrevocably tying his son to the past., but never mind.

Defenders of the Campbells have pointed out that according to US law he has a Constitutional right to name his child whatever stupid and offensive thing he and his wife choose. Interestingly, Wal-Mart will write Hitler on a cake, but not a profanity. A fact, that in our view, infringes every American’s First Amendement rights. If on their son’s fourth birthday the Campbells want a cake that says Happy F**king Birthday, Adolf Hitler, then they’ll have a Constitutional fight on their hands.